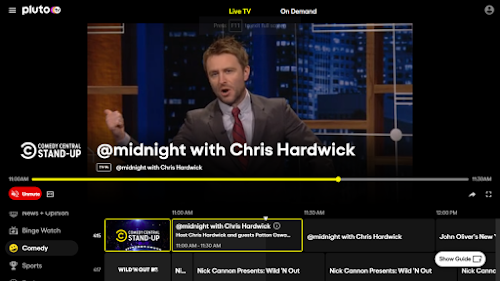 Back in January 2019, it was announced that ViacomCBS acquired Pluto TV. At the time, it was a move that surprised me, but made sense as I thought about it. This was prior to Viacom’s merger with CBS Corporation, and they were looking for a way to get into streaming without angering the cable companies, all while bolstering their linear channels. Plus, it’s free, so that’s a good way to gain some traction.

The only other conglomerate in the industry offering a free streaming service at the time was Sony’s Crackle, which streamed content from Sony’s library including at the time Seinfeld, and had found limited success with originals like Comedians in Cars Getting Coffee, and Joe Dirt 2, which brought in over 2 million views in the span of 2 and a half weeks; not bad for a service that hasn’t exactly lit the world on fire.

A month or so after the acquisition, Pluto TV unveiled multiple Pluto TV versions of Viacom channels, which air content older than a year, like Comedy Central, Nickelodeon, MTV, and more. Pluto TV also made new channels to promote events happening on Viacom’s linear channels, like a Tosh.0 channel to promote the new season, an MTV’s The Hills channel for their reboot, and a VMA highlight channel for the VMAs.

When the news initially broke in January 2019, many comments online expressed fear that this would no longer be a free service. As time went on, more and more content was added to the service, and Pluto TV received a new logo and new interface to keep the service fresh. They also unveiled a new ad campaign, both online and through billboards in cities, promoting its free price, its lack of required registration, and the amount of content it has. Considering the tens of millions of active users, I think Pluto TV will remain free. Especially as ViacomCBS’s announced streaming strategy has Pluto TV as its free first stop as a promotional vehicle to encourage users to upgrade to what is now CBS All Access.

More evidence of this was announced July 7th 2019, as Pluto TV will be adding 40 shows from CBS and Comedy Central to the service. The shows range in time period, and includes the first ten seasons of South Park, which is big news considering the only other place to stream the show without cable is on HBO Max. This continues to add more value to Pluto TV, but more than just value for the service, I think it adds value to its name.

CBS All Access currently sits at around 5 million subscribers, which is higher than ESPN+, but lower than HBO Now. The service started in 2014 and paved the way for other companies to start their own services during a time when almost all broadcast and cable shows could be found on Hulu. Since then, subscription numbers have slowly risen for CBS, at least in comparison to services like Disney+ and Apple TV+. Services like those can rely on their brand to bring in subscribers, especially Disney and HBO. Other companies will have a harder time bringing people in, which is why Comcast bought Xumo, and has a free version of their service Peacock.

This leads me into why I believe CBS All Access should have its name changed to involve Pluto in the title. ViacomCBS’s plan for streaming has a three-step strategy: Free, Paid, and Premium. Pluto TV will be free, CBS All Access (or its new name) will be the 1st step in paid providing most of the service, and Showtime will be the premium 2nd step in paid providing more content. To me, it seems odd to even have a third step to get Showtime content, but if it keeps the price lower, I suppose choice is not only a good thing, but kind of the whole reason the streaming revolution started. Regardless, Showtime is an established name so it would make sense to keep that to entice upgrades, but CBS All Access frankly isn’t. Not to mention the CBS name is misleading, as more than just CBS content is on the platform. While CBS is arguably the strongest brand in the ViacomCBS portfolio, to continue using the name while bringing their other properties under a title that just includes CBS would be confusing.